Spiti Valley in Winters is truly paradise personified. The whole valley is covered in a thick tapestry of snow, seemingly spreading to a vast expanse until one can’t tell where the land ends and the sky full of ivory clouds begins.

For snow fanatics and people who’d rather be taking a stroll under the winter sun than being huddled in blankets, Spiti is nothing less than a dream. A dream that feels more than real when the chilly breeze fills your heart with warmth from within.

What makes the Winter Spiti tour perfect is that you get to experience Spiti the way it’s meant to be experienced, with snow under your boot and mountains overlooking you in all their glory.

Although the temperature drops below – 30 degrees and heavy snow make it almost impossible for people to transport freely, the locals are happy because the more it snows, the higher the chance for them to get more water when the cropping season begins.

There is a reason why a Spiti trip in winter is on every traveler’s bucket list and it’s not just because of its mesmerizing natural beauty but also because of the serenity the valley provides, the monasteries that have been there for thousands of years, and of course the wonderful people who make you feel at home with their amazing hospitality.

It’s no secret that the best route for Spiti valley in winter is via Shimla because the route stays open throughout the year and only closes if there is heavy snowfall. Apart from that, you get to glimpse the beautiful valleys and meadows en route while driving on the Hindustan-Tibet highway which is an amazing experience on its own. Not to mention that the gradual ascend towards the higher altitude through this road makes your body adapt to the conditions easily and with comfort.

This real trip to Spiti Valley starts when we reach Chitkul, the last village in India which is considered to have the cleanest air in the country. It is after spending a night in this village, that will you realize how you’ve left the city life behind and for the rest of the days that you spend here will be spent without any unwanted noise reaching your ears. Instead, there will only be the sound of chilly winds blowing and snow crunching underfoot.

As we move more towards Kalpa, you will start getting mesmerized by the views. En route, the town of Reckong Peo will beckon you closer with its apple orchards and picturesque backdrop of the Great Himalayan ranges.

Once we reach Kalpa, the heavenly landscape of the Kinnaur Kailash peaks, the  Sutlej river flowing through the gorges, and the patches of Chilgoza forests covered with snowflakes spread out evenly will make your heads turn in delight.

Kalpa is known for its breathtaking views but it’s also popular for the 3000-year-old Kalpa monastery and the suicide point, named so because of the narrow roads with a rugged mountain on one side and a cliff on the other side. The suicide point also serves as a vantage point for a panoramic view of the Kinnaur ranges which will be covered entirely in snow adding more charm to its beauty. However being on such a high road with no support, does make your heart beat ten times faster and the rush of adrenaline mixed with the soothing view is surely an experience that not many people are lucky enough to have.

The trail to our next spot has the village of Khab as the perfect halt. The village serves as the union site between the Sutlej and Spiti rivers and once you reach here, you won’t be able to leave it behind without carrying some part of it with you in your heart.

Located amidst the trans-Himalayan ranges and home to a thousand-year-old monastery and many Buddhist stupas that have stood the test of time gracefully is Nako. Overlooked by Reo Purgyal, this village is a perfect spot for those who are looking for some peace of mind. A visit to the serene Nako lake and a chance to visit the Nako monastery is something that you simply can’t miss out on in this Spiti valley winter trip.

On our way to our next stop, we will be visiting some of the monasteries in Spiti which serves as the foundation of the decade-old heritage and culture of the valley.

The Tabo Monastery situated on the bank of the Spiti river is the oldest monastery, dating back to 996C.E. The wooden structures and thangka paintings that one can find inside the monastery have faded over time but still grace the monastery with their significance. A national historic treasure, the monastery is protected by the ASI.

Originally built as a fort on the Central Tibetan pattern and overlooking the union of Spiti and Pin rivers, The Dhankar monastery has aspects that date back to the 12th century.

Upon reaching Kaza, we will finally be able to immerse ourselves in the magic of the winter wonderland that is Spiti valley. There will be no sign of the barren terrains or the green canopies as everything would be covered in a sheet of ivory snow and it’s only when you witness the abundance of snow everywhere, from underneath your foot to the faraway mountains you see will you finally understand, why there is no better place to see snow than Spiti valley during winters.

We will take you to all the best places in Spiti during our sightseeing tour and make sure that you take some essence of Spiti with you when you go back. Firstly, we will be visiting Kye Gompa, more commonly known as the Key Monastery which sits proudly on top of a hill at an altitude of 13,668 ft. It is not only the oldest as well as the largest monastery in Spiti valley but also serves as the training center for the Lamas. The walls of the monasteries are covered with colorful murals and paintings. There are also collections of books, murals, and even images of Buddha that the monastery has safely preserved.

The highest bridge in Asia and another popular attraction of Spiti Valley is the Chicham bridge which provides a view of a deep gorge running through the steep valley under it. Another tiny hamlet and easily one of the most beautiful villages of Spiti is Komic. A tiny hamlet where life slows down as if to take all the weight off of your shoulders.

The highest post office in the world, from where you can send letters to your loved ones is Hikkim, and one of the many reasons why people visit this one spot is because of the nostalgia and old-school charm attached to it.

Last but not least, we will take you to the land of fossils, Langza which perhaps wouldn’t be the hotspot of eager travelers exploring the hidden gems of Spiti if not for the tall Buddha statue that sits atop a hill, seemingly overlooking the village to protect it, as the locals believe.

Winters are the best time to visit Spiti Valley because it’s only when the valley is covered in snow, do you get to witness its magic in all its glory. The experience of a Spiti valley winter trip is unmatched which is why the best time to Spiti for a winter trip will be from February to May.

How much time does it take to cover the distance from Manali to Kaza?

The time it takes to go from Kaza to Manali is approx 4 hours including leisure and the pit stops that we make. The total distance between Kaza and Manali is 182 kilometers.

What is the temperature of Chandratal Lake?

How to Reach Spiti Valley From Manali?

There are two routes to reach Spiti. One is via Manali while the other is via Shimla. Shimla route is considered to be one of the best routes to reach Spiti Valley especially when it comes to winter Spiti road trips. The gradual ascend makes it easy for people to get acclimatized to the high altitude and weather conditions. Not to mention that the views in the backdrop of the Hindustan-Tibet highway make it all the more worth it.

How much time does it take to cover the distance from Shimla to Kaza?

The distance between Shimla and Lahaul is 418 Kilometers and it takes about 16 hours to reach, including leisure time and the pit-stops that we make when we are on a Spiti valley winter road trip.

When is the Manali route to Spiti Valley open?

The Manali route to Spiti Valley is open at all times but during the winter seasons, due to heavy snowfall, the roads become slippery and hostile which is why it’s not recommended for a common tourist to embark on a Spiti valley road trip in winter all on their own. 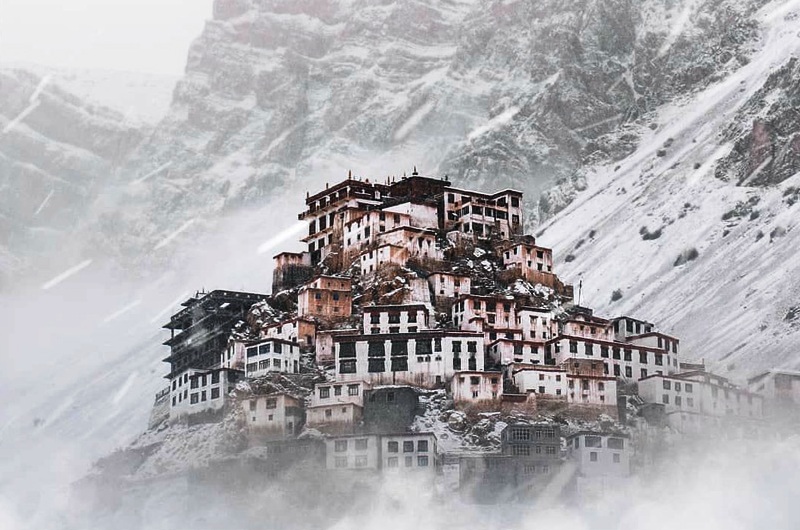 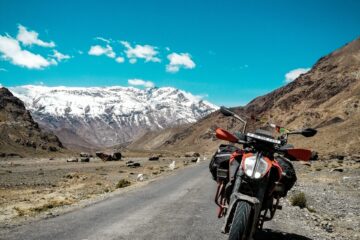